4/11/13 AL overnight
Turns out Heart of Dixie had wi-fi. I found out as I was leaving so I parked the trailer near the office and uploaded GA & AL posts. It was a slow connection so I didn’t upload the photos. Wildflower was difficult to load so I loaded Dreamy 1st then got her on. I prefer to give Dreamy the last stall, it is roomier and she is a longer horse plus she has leg issues so I think she needs the space more. The 2nd stall has the wheel well so it is shorter. When I got to my overnight (Bill Mackey’s Ranch in Gallion, AL) and put them in their stalls, I noticed WF was holding her hind left foot up. I didn’t think it was serious tho. When I tried to load her this morning and she was refusing, I circled her and noticed that she was really favoring it. There was a tiny bit of blood under the fluffy part of her lower leg, the fetlock area I think its called. After trying to get her on first and then second I decided to give her some bute. I waited 1/2 hour and she seemed a little better but still wouldn’t get on the trailer. Juan and his groom helped me. He used hoof testers to see if she had an abcess (she didn’t). Finally a bucket of Nutrena Safe Choice got her on. She can be so stubborn. I remember when she did this to me a long time ago. It was when I was taking her from the Flintridridge Riding Club to go live in our backyard. I spent 3 hours trying and ended up in tears, leaving her there. Charni worked with us the next day and she got on for her. I remember the key pointers were to not get frustrated or mad and to constantly reassure her when she took a tiny step. But that wasn’t working for me today. Its like she is telling me she is sick of this trip? Is that far fetched?

Last night I watched Juan work 4 of his polo ponies. Gallion is a gorgeous area of Alabama. Bill has over 30 polo ponies there. Juan is a 4 goal player and used to be a 6 goal player. That’s how they rank you. He was getting ready to go to a match in Mobile. He spent a lot of time telling me all about polo, the moves they make, the sticks they use, how they train, how he practices, he showed me some of the magazines he was in and gave me a dvd to watch of one of his matches (but I didn’t have time to watch it)… I really enjoyed his company. He then shod a few of the ponies, hitched up his 18 horse trailer, backed it into a really tight spot by the barn and proceeded to put new mats in it the next morning. I don’t think the guy ever sleeps. I hope his team wins this weekend. I never actually met Bill, the property owner. I did meet Marion who boards a horse there. She spent a long time talking to me about her horse, how she broke her arm, her daughter who is a equine vet, about moving back to FL (she doesn’t want to but her husband does). She is a coder at the hospital which I didn’t know what that was, but she explained she assigns the procedure codes for insurance purposes. There are millions of them. I asked if she had them memorized, she laughed and said no, its software that she uses. She used to be a mortgage broker which seems like a big switch to me. The property was lovely. The horses had stalls with small pens outside. They watched with interest all the polo ponies grazing on the huge pastures. 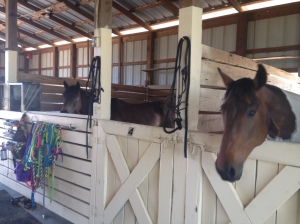 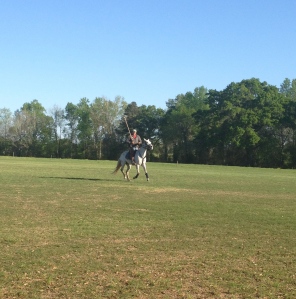 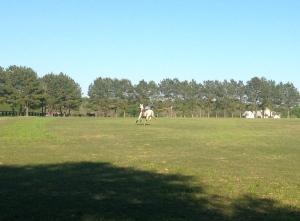