I woke today to a picture perfect day. I love being at the top of the mountain, I feel like I am in the sky. I don’t know what the altitude is, probably not so high, but we are above everything else around here. Its very breezy, light puffy clouds moving swiftly. I walked Tommy around (encountering Dave’s loose horse along the dirt road), deep cleaned the trailer, even the horse area (it has gotten filthy in the last 11 months), set up to paint outside, Liza set off for laundry and groceries. The horses have been roaming around camp with cowbells on (which they have now lost) and lead ropes dangling (this works better than hobbles and doesn’t wear off their fur). I’ve dabbled at trying to recollect the last week and write it down but I’ve probably missed a bunch of stuff. I’m just relaxing enjoying life today, God is Good.

This is a beautiful camp. All the sites are grass and treed, all have full hook ups, there is a bath and shower house, a dog pond, a small above ground pool and a very good vibe.

Liza took the canoe out into the “dog pond” to try and get Tommy to swim. Eventually he jumped into the canoe too but would not swim. Silly puppy. There are a bunch of other dogs here, all friendly. Debbie has 2, Dave has one or two, Kathy has 1 and the other couple have a couple too. Tommy has behaved well with them and stays pretty close to the area we are in. I’m going to ride with Dave, Kathy, her husband and I’m not sure who else tomorrow. It will be a great ride according to Kathy and Debbie. Probably too tough for Liza so she will stay in camp. Kathy will take us on a short easy loop the following day that Liza can handle.

All the folks I have met are permanent campers, they leave a trailer here and use stock trailers to bring their horses up on weekends. It would be so cool to live close enough to do that. Debbie came here in May to ride and never left. She is working for her camp fees and goes down to CT every 3 weeks to check on her mom there who has Alzheimers. Its her birthday this weekend and her kids are taking her camping (not with horses) somewhere else. Her 16 month old grandchild will be camping with them. Her daughter is 35 and is trying to run a marathon or half marathon in every state. What a cool idea!

8/9/14 Saturday, its getting harder and harder to remember what day it is. This 4 nights per camping stop is harder to figure out. I liked the 7 night routine better, hauling on Sundays (less traffic and closed weigh stations), and having a more relaxing time, more time to ride or not ride. This routine now only gives me 2 ride days and I go back and forth of who to ride when, to pony or not….

Yesterday was so lovely. Dave came back from work and stopped by to chat which turned into an hour long rambling monologue which I had difficulty following. Not sure what that was all about. Later, Larry said well that’s Dave, he spends a lot of time alone. But Dave is very nice and can fix or build anything, a trait that I find very attractive lately. My husband never fixed anything, I had to. And I don’t really know how to so I would waste a lot of time trying to just figure out what the problem was and how it could be done. I kind of enjoyed doing that but over the years I came to resent it.

While Liza was looking for a dumpster for our trash, Tommy got into a scuffle with one of Kathy’s dogs and he scooted in front of Larry’s moving truck. I heard some screaming and when Liza got back she told me what happened. Tommy got a leg pinned under the tire. He is not limping and doesn’t react to any of my probing. Oh Tommy. He has to learn to stay away from trucks, this has been a problem all along that I have not been able to correct. Kathy’s dog has gone after him a couple of times already so I don’t know if I should take him on our trail ride today…Her dogs are cute but have a couple of undesirable behaviors. I saw him biting and hanging onto her horse’s tail. If he does that to Wildflower he is going to get kicked for sure.

Kathy and Debbie asked us to the people pen for pork chops. When we got down there Larry had cooked up a delicious dinner of pork chops (cooked 2 ways), 2 kinds of potatoes and grilled veggies. Kathy had made drinks of vodka, pommagranate juice and fresca (sounds awful but was good, we named it the Buck N Beverage or B&B). There was a roaring fire in the fireplace and we got to know one another better. Another couple from up the road came by and eventually Dave showed up, back from driving to Concord for a machine part he needed. I got to bed after 10 which is late for me.

Well, its 9am, we have all eaten so I guess I’ll go talk to Kathy about the trail ride/dog issue. We are supposed to leave at 10. Dave left with his semi earlier and is not back yet so I guess there is no rush. He is our guide. I love it when camp owners offer to take me out. They know all the trails and I don’t have to even think about getting lost which is lovely. And they know all the best spots, he has mentioned some spectacular view…

Well I forgot that Kathy was going camping with her kids and wasn’t riding with us so our dog’s relationship was not an issue for our ride. Kathy, Larry, Dave and I went out to ride, Larry ponying another horse. The trail was marked with ribbons but I don’t think I could of followed it. On the downside: Dave took off at a canter on the first hill but it was too early and too rough to let Wildflower follow so she tried like heck to run off with me, I lost a boot twice, got kneed in the cheekbone replacing it once, Wildflower kicked another horse while she was hobbled at out lunch break, she tried to kick Kathy’s dog once, she jigged and rushed most of the ride even tho I was using the shanked bit, a boot needed to be repaired afterwards and she has a gash at the top of her right rear leg in an awkward spot (no idea how it happened). Larry let his pony horse loose most of the ride and WF was in season (he kept trying to get behind her which I was afraid of getting mounted by, this has happened once before and I do not care to repeat it). The ride was uneventful as far as the other riders are concerned, I was exhausted. WF was in a full sweat and breathing very hard. Her legs were quivering and I decided to walk the rest of the way home. Kathy stayed back with me. On the upside, it was beautiful with some great views. The first part was very rough trail (which is why I kept loosing my right hind boot perhaps), footing was rocky and muddy in spots. A lot of it was heavily overgrown and you couldn’t see the ground at all. A lot of hills, bridges were mostly not horse worthy so we went around them. I am very glad Liza didn’t come with us, she could not of handled it. Instead she went to Walmart to get some more pants.

I finished the Maine painting in the afternoon. Slim (a neighbor) came by and chatted. He lived in Branchville NJ for a while, right near where I had the horses when I was there. He is an avid mounted shooter. He had come by with fresh picked string beans for the campers. He came back to join us for dinner which Larry cooked, steak, corn on the cob and watermellon. We brought brocalli. A couple from up the road was there too. She took me to their property. Its 30 acres of woods that they bought from Dave for $20,000. What a deal! They have a camper and outhouse set up there. They are planning on building a cabin soon. Pretty cool place, they call it the Starlight Room or something like that. They have a pop up set up, that she called the guest house (but it was the love shack today…). She left right after supper to “take her husband home”, he was pretty drunk.

Dave told a story about a neighbor problem. Ugly stuff. One guy has hired thugs to move in to harrass him.

Today we are planning a short easy ride, not sure if WF is rideable yet tho, I cleaned up the gash with green tea and put more fureson on it. Its starting to heal. I gave her arnica last night. She doesn’t seem to be very tender nor resting it. At 10 Slim is coming by to take me to get some hay. And I need a shower.

The next stop is a short haul, its a VT state park, primitive but they have water, corrals and a bathhouse. I’ve checked out an overnight alternative (they never called me back) and a resort listed on the Best of America by Horseback website (kind of pricey, no staying in your trailer, they have a 1 bedroom cabin for $245/night) and Liza has contacted her ex-husband who’s parents live in VT, for ideas. We’ll probably just end up at the state park I guess.

kids at a rest stop 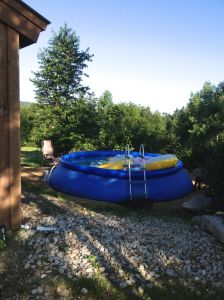 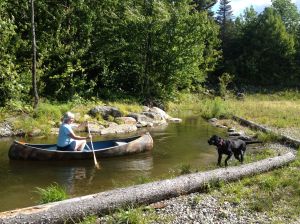 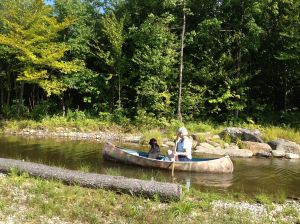 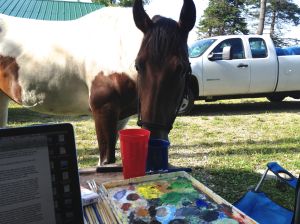 Dave on Taz at the view 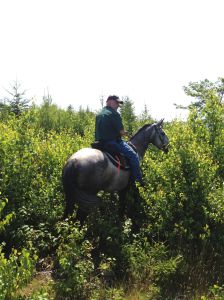 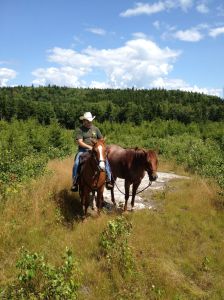 lunch stop on the trail 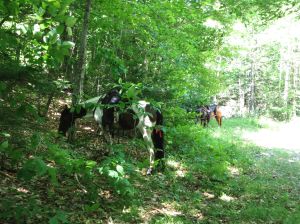 tied up after kicking another horse for no apparent reason